Effective communication of the gospel is essential if those who do not believe in Jesus are to come to faith. How shall they believe in Him of whom they have not heard? Rom 10:14. However if the message is unintelligible then they may not have heard enough clear information to believe. Clarity is vital. We can all think of poor methods of gospel presentations that do not connect with people or culture. But something happened this summer to make me think again.

Coming to the end of a long visit to the USA, my wife and I had a spare day in Boston while waiting for a flight home. It was a hot day, and after spending our time looking around the harbour area, we ended up back in town, eating ice cream on seats outside a well-known pharmacy, as it was in the shade.

Just next to us were some street preachers, letting rip with a message of hellfire and repentance. In the space of five minutes I heard words like atonement, justification, substitution, all backed with quotes from the King James Version of the Bible, with many thees and thous. They even mentioned George Whitefield and his visits to Boston in the 1700s! In addition there were a number of placards, such as “Christ died for our sins.”

I could not fault their doctrine, and Whitefield is a hero of mine, but I wondered whether any of the people walking past understood what was preached. It was hard enough for a believer to follow, let alone non-believers, who I suspect were the majority around that day. How shall they believe in Him of whom they have not heard clearly? (I added the clearly!)

Not surprisingly most people ignored them, and only the occasional person stopped and was brave enough to receive a tract.  No-one actually stood and listened to the preacher. But then I spotted something a bit out of the ordinary. Behind one of the placard holders was a lady with her own, much smaller placard, which said, “Smile if you worship Satan.” 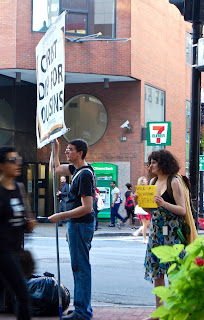 What was so interesting, and a bit amusing, was that this lady was getting far more attention than either the preacher or the placard holders. Every now and then someone would give her a big smile and she would smile back and wave enthusiastically, ignored by the street preaching party. She was clearly benefiting from her location behind the street preachers and the contrast it gave. It did make me smile.

Smile agh! She caught me smiling. “Do you?” she mouthed at me, assuming I was a worshipper of Satan. “No!” I mouthed back, shaking my head furiously. Well that was it; I had to speak with her. I told her: “I can’t agree with your message, but 10 out of 10 for communication.” She was having far better results than the street preachers.

It turns out she was not a follower of Satan, but just someone who disagreed with the way the street preachers were proclaiming the gospel. “I have read about Jesus in the Bible” she said “and he did not do it this way”. I sort of agreed, and said he told stories, parables, but assured her Jesus was definitively worth reading about!

Afterwards, though, this got me thinking about which of the two, street preachers or “Satan” lady, were the best communicators. Yes Jesus did tell parables, but he didn’t tell them for the purposes of effective communication, but so that those listening would not understand, and thus confirm their hardness of heart! Therefore I speak to them in parables, because seeing they do not see, and hearing they do not hear, nor do they understand. Mt 13:12. He quotes this as a fulfilment of Isaiah 6: Hearing you will hear and shall not understand… For the hearts of this people have grown dull.

The New Testament church did not appear to use parables, however even they were not understood.  Paul was called a babbler in Athens (Acts 17), probably doing something very similar to the Boston street preachers. When he finally got an audience all went well until he mentioned the resurrection. Now they understood – so they walked off! The issue was not understanding, but hardness of heart.

Indeed effective communication of the gospel can be a dangerous business.  Early church leader, Stephen, had no trouble getting his audience to understand him, but they killed him for it. The issue was not understanding, but hardness of heart (Acts 6-7).

So what is the purpose of such street preaching if people walk by, or walk off as soon as they understand you, or kill you because they don’t like it? How can anyone believe through preaching?

I remember a story the late preacher, John Wimber, told. When he was not a Christian he used to see a man walking with a placard. One side said, “I’m a fool for Christ”; the other said, “whose fool are you?”  Wimber thought how stupid the man was. But after his conversion he could remember the incident well, and “Fool for Christ” became Wimber’s personal motto [1]. Though it appeared the man in the billboard had communicated nothing sensible to Wimber, it had played its part in his conversion. The issue was hardness of heart, not understanding. But something sunk in that God used later.

Long before I was a Christian I used to listen to music on Radio Luxemburg, mid 60s to early 70s. Sometimes it would fade out, and briefly in would fade Trans World Radio, a Christian station [2]. It really annoyed me, and if Luxemburg did not come back fast I would switch elsewhere. I never listened to more than a minute of something I had rejected as unintelligible rubbish. I eventually stopped listening to Luxemburg, and the Trans World Radio interruptions. Eight years later, when I got converted through other means, I could remember the radio evangelist’s name, Dick Saunders, hymns, main points and appeal! The issue was hardness of heart, not understanding. But something sunk in that God used later. 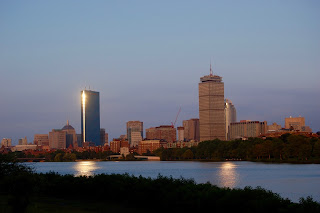 So I wonder if street preaching may be more effective than we realise, and even though ignored and rejected at the time, God uses it to soften and open the hearts of those who will not embrace him. Whether it is street drama or heavy-duty hellfire with King James English – God uses it. Jesus had little fruit to show at the end of his ministry; most had walked away, his teaching rejected, and his parables not understood. But he had sowed the seeds that led to people’s future conversion.

Having said that, the next time I hear an atheist speaking, or a secular politician spouting forth with a godless message, I think I will stand near holding a sign that says: “Smile if you love Jesus!”

[1] John Wimber led the Vineyard Church in its early years and had a huge influence in charismatic renewal and evangelical Christianity. He told his conversion story in: The Dynamics of Spiritual Life, John Wimber and Kevin Springer, 1990, page 118, Hodder & Stoughton.