The Rise and Decline of British Methodism

Application of the Institutional Model of Church Growth

Some while ago I introduced a model of church membership that explain the rapid growth of a church, only to be followed by decline as institutionalism set in [1]. The primary effect of institutionalism is on the conversion rate. Thus it is possible for a once vibrant, growing church, be it congregation, or denomination, to end up heading for extinction, as it is unable to sustain enough conversions to counteract its losses.

The primary purpose of the model was to provide an alternative explanation of church decline to the limited enthusiasm model. The latter uses the metaphor of the spread of a disease and can work well for periods of revival, and as a model of decline on its own. However it can’t model decline whose cause is a loss of vitality.

By contrast the institutional model uses the metaphor of overshoot and collapse due to the production of a resource with unintended consequences. As the church grows it becomes more organised, more professional, and becomes a pillar of society – all traits of organisational intuitionalism. After some delay, this institutionalism restricts recruitment, eventually causing decline. But because of the delays the church is not able to spot the unintended effects of a professional church and cannot take action fast enough to correct the problem. It knows it needs revival not regulation, but can’t quite bring itself to let the chaos of a spiritual outpouring spoil its neatly ordered structures. The ultimate result is extinction.

Most of the pre-1900 denominations in the UK display the growth and decline pattern, and are thus candidates to fit the institutional model [2]. Unfortunately few have consistent data over the time span required, the one church that does are the Methodist Church [3]. As they were birthed in revival, and are now declining, they are therefore an excellent candidate to have their membership pattern explained by institutionalism.

The model is constructed using system dynamics, a methodology that explains behaviour in terms of feedback [4]. There are two variables: Church meaning church membership in this case, and Institutionalism, figure 1. These are indicated by rectangles, called stocks in the diagram. The more people in church the more people are added to the church, feedback loop R1. People are the primary resource of the church, contacting those outside the church, and bringing them to faith.


Of course the more people in church then the more will leave each year, balancing loop B1, figure 1. R1 needs to be bigger than B1 for the church to grow.

There is only so much institutionalism any organisation can take, it becomes harder to generate as it gets bigger, loop B3. Indeed there may be attempts to reduce institutional, loop B4. However there will be people in the church who want to maintain the institution regardless of its size, loop R2.

The model of figure 1 is fitted to membership data for the Methodist church in Great Britain, that is excluding Northern Ireland [5], figure 2. The earliest reliable data is 1767, which is well within the church’s early revival period, thus a good starting point [6]. The data fit is given in figure 2, where the membership figures of the different branches of Methodism have been combined in the periods where they were organisationally separate [7].

The model gives a remarkably good fit, except around the times where a major division occurred (1850), and the subsequent rejoining of different streams (early 20th century), figure 2. This may be connected difficulty in collecting data in such periods, or genuine loss to the church.

The model takes into account population growth, and the higher death rate and lower birth rates in an aging church [8]. However these effects are hard to estimate accurately as the church get smaller. Note the discrepancy in the last two data points; the model is more optimistic than the actual data, which currently predicts extinction before the middle of the century.

Generally membership the church peaks around 1900. However if the growth of the population is factored out then real growth, i.e. proportional growth, ended mid-1860s,  figure 3 [9]. After this time the church is making no further inroads into the population, losing ground instead. The year of this turning point compares well with some other denominations [3].

Thus Methodist church dynamics can be divided into three periods: revival growth, saturation, and decline. What is the reason for this change to decline?

The model explains decline in terms of rising institutionalism. For the Methodist church the model indicates that institutionalism rose fast late 1700s to early 1800s, around the time it moved from being an Anglican renewal movement to a separate denomination. Since the mid 19th century, the transition from revival growth to saturation,  institutionalism has remained intact, figure 4.

The effects of rising institutionalism can be seen in the various rates of change, figure 5:


From its inception up to the mid 19th century Methodist dynamics were dominated by conversion, that is recruitment from outside the church. This accounts for the church growing faster than the population during that period. These conversions cannot be explained by transfer growth from other denominations alone, as all denominations grew during this revival growth period.  Note conversion is much bigger than biological additions. The sum of the two is much larger than the losses due to deaths and leaving.

From the middle of the 19th century, the saturation period, recruitment stops growing and is slowly caught up by the leaving rate of a still growing church. Meanwhile the biological additions peak in 1900 as the church starts to age due to there being a smaller margin between conversion and leaving. However the death rate continues to rise. The transition from the saturation period to decline around 1900 is largely due the changing balance of these additions and losses

In the decline period conversion/recruitment and leaving rates are more less the same, thus conversion no longer drives the dynamics. Instead, with falling national birth rates, and aging congregations, the decline dynamics are dominated by the church death rate, which becomes the largest from 1975 onwards. Churches never retained more than about 50% of their children [3], thus without a vibrant conversion rate, unhindered by the effects of institutionalism, the church cannot possibly make up for its losses.

The time for the church to deal with its institutionalism was in the 1860s, where the end of proportional growth, figure 3, would have been sufficient evidence that something was wrong. By the early 1900s when decline starts, and a generation had past without revival, it was too late to make effective changes to its dynamics. Such is the effect of delays. So what can be done now?

I realise such deregulation of denominational structure might lead to the end of the Methodist church as a denomination. But what it could lead to is new church movements that emerge from its now freer, stronger congregations, who would be the seeds of future denominations. This is not a just a Methodist issue, but a strategy that could be replicated across all declining denominations.

The Christian church in the UK is in a state of transition, the old is passing and the new will come. Yet managed well the best of the old will survive and flourish in the future. The Methodist denomination may go [10] but the spirit of Methodism will emerge, perhaps stronger, in churches with new names, but believing the age-old beliefs that made Methodism so strong in its early days.

[2] The Baptist Union of Great Britain is an exception to the growth and decline pattern. This may be due to it being a collection of independent churches – often very independent!

[3] I have already discussed the reasons for growth and decline using data from the Welsh Calvinist Methodist Church, aka the Presbyterian Church of Wales. Like the Wesleyan Methodists they have a rich data set, recording births, deaths, joining and leaving rates. Indeed their data shows the stability of leaving rates, and child retention rates, over long periods. Instead it is the change in conversion rate that affects growth and decline.

Blog: Church Decline cause by Lack of Revivals
http://churchgrowthmodelling.blogspot.co.uk/2015/12/church-decline-caused-by-lack-of-revival.html

Blog: Why Revivals Stopped in the UK
http://churchgrowthmodelling.blogspot.co.uk/2016/02/why-revivals-stopped-in-uk.html

[5] The division of Ireland into North and South in the 20th century makes it difficult to include figures for Northern Ireland over a 250 year timescale.

[8] The growth of the GB population is given in the graph below. Note how population growth accelerates in the 1800s with the industrial revolution, then slows a bit in the twentieth century. 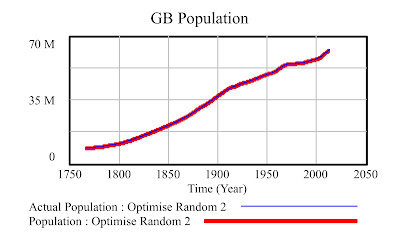 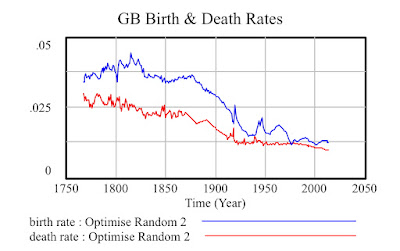 In the 18th and 19th century, the church was generally younger than the population average, hence the birth ratio being above one, and the death ratio below one, see graph below. The most likely explanation is that the converts into the church were younger than the population average. Modern studies on conversion shows that it peaks in the twenties age group. When conversion rates were high, and the church growing, the church was relatively young, even though it only kept half its own young people. As conversions fell the church became older. Thus from 1900 the death rate rises and the birth rate falls, graph below. With the current levels of birth and death rates in church, even a large revival would not turn decline into growth overnight. The effects of revival now may not be fully seen for 30 years or more. 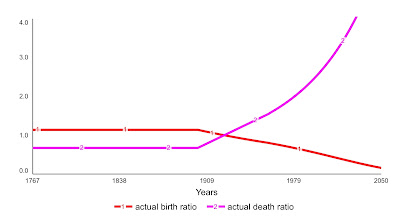 [10] Although statistically most pre-1900 denominations are heading for extinction, this does not mean they will inevitably go extinct. Some may survive in a much smaller form, probably in large towns and cities, providing a valuable link with the past. Indeed there is no reason why a church that is almost extinct cannot grow again if it turns back to God and receives his power. The Lord looks at the heart not the denominational name, or the statistics!

Posted by Church Growth Modelling at 21:18