Feedback in a system that changes over time is the mechanism where an action results in an effect, which then in turn influences the original action. The action literally “feeds back” on itself.

For example, if a population grows through births, the more in the population, the more people are born, thus even more are added to the population and it grows faster. This is a reinforcing feedback loop; the result is exponential growth, that is growth that speeds up [1].

Sometimes church leaders think that churches grow the same way. The larger the church becomes, the more people are added to the church, thus the church grows even faster, figure 1. People may be added through births and through conversion. The rectangle “Church” is called a stock. It is an accumulation of people. The pipe “add to church” is called a flow and represents the addition of people in a fixed period of time. Figure 1 is an example of a system dynamics model.

It is true that the early phase of a church’s growth is often exponential. However, with a bit more thought, not everyone in a church is engaged in the process of adding people to the church. Some are inactive in church altogether. Others may be active in church life but may have never brought anyone new to church. Others may have invited new people in the past but are no longer doing so. For many of the churches I have studied I have estimated that at any one time less than 5% of church members are active in adding people to their church.

As an alternative to the hypothesis in figure 1, I have proposed an alternative feedback hypothesis where only a subset of the church actively adds people to the church [2]. I call these people enthusiasts, after the nickname given to the Methodists in the 18th century – people who were very active in evangelism. Figure 2 expresses this hypothesis as a reinforcing feedback loop

Balancing feedback is the process where the effect of an action attempts to restrain rather than reinforce the action.  For example when a population is declining through deaths, the more deaths, the less people in the population, thus deaths are reduced. The result is the exponential decay of the population, decline that slows down [3].

There is good evidence that enthusiasts do not remain so indefinitely. Some run out of people to invite to church, others get taken up with other aspects of church life and forget evangelism. John Wesley complained that his converts went on to become much better people as a result of the Holy Spirit in their lives, so good they became prosperous, and lost their zeal for religion! This is often called Wesley’s law of the decline of pure religion [4], and can be expressed as balancing feedback:

Fig 3. Balancing feedback (B2) and enthusiasts

Of course converting people and making them enthusiasts does not occur in a population of an unlimited supply of people. Populations are finite and as people are made enthusiasts, this pool of unbelievers declines, and it becomes harder to make enthusiasts. This is balancing feedback on unbelievers:

Fig 4. Balancing feedback (B3) and unbelievers

Because unbelievers become enthusiasts, then the effect of the balancing feedback on unbelievers, slowing its decline, is mirrored in its equal and opposite effect on enthusiasts, slowing their growth. Feedback loops exert forces on the population, speeding them up or slowing them down, and this mirroring effect is the equivalent of Newton’s third law of motion. Some readers may remember that from high school physics. 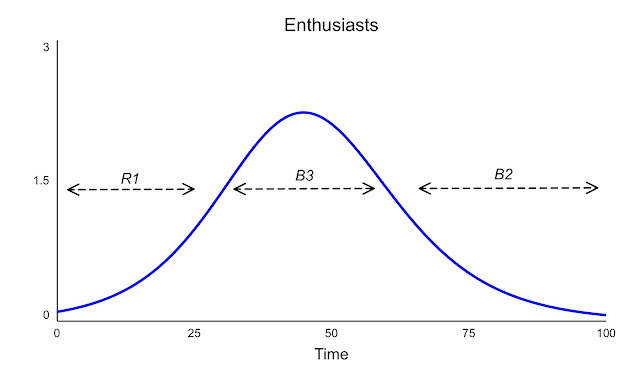 Fig 5. The effects of feedback on the growth and decline of enthusiasts (percentage of population)

The effect of enthusiasts’ activity is that the total church, enthusiasts and inactive Christians, follows S-shaped growth, figure 6.  The final level of the church falls short of the total population. The enthusiasts have burnt out before they reach all people, just under 40% of the population in this example, the result of the three competing feedback loops. 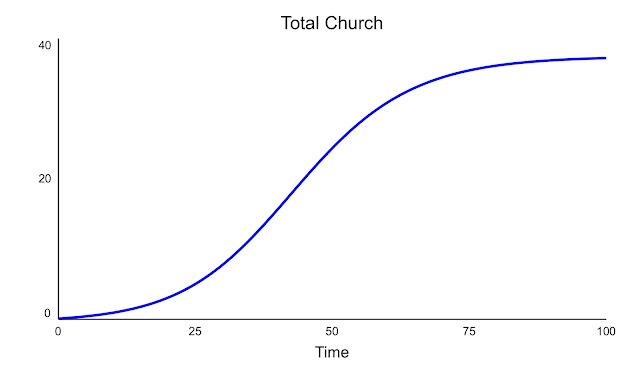 Over time people leave the church and people die, both balancing feedback. However new are born into the population, replenishing the pool of potential converts, a reinforcing loop. Thus enthusiasts never quite go to zero and a stable balance of church numbers is possible, despite losses and deaths. Nevertheless if conversions are not sufficient, both enthusiasts and church can head for extinction, the situation currently faced by many UK denominations.

This “limited enthusiasm” model described here works well for a couple of generations, but over longer periods the effectiveness of churches in conversion changes for other reasons, usually resulting from “second order” loops.

All the feedback described above is “first order”, that is, only one stock is involved in the loop, see figures 1-4.  First order feedback means that its effect on increasing or decreasing a population is immediate, and thus relatively easy to follow. Not so for second order feedback, which involves two stocks. Its effects are often delayed and counter intuitive.

To give an example of  second order feedback, consider the case of loops R1, figure 2, and B3, figure 4, acting together, figure 7. Although B3 is first order on unbelievers as only one stock is involved, figure 4, the combination is second order on enthusiasts, figure 7. As enthusiasts increase, more people are taken from unbelievers, thus unbelievers falls, thus less are made enthusiasts and their numbers eventually slow – a balancing effect with two stocks. The result, with B2 (figure 3) added, is growth of enthusiasts changing to decline, figure 5, a type of behaviour that cannot occur in a stock that only has first order feedback.

Fig 7. Combining feedback loops B3 and R1 is a “second order” effect.

Jay Forrester, the founder of system dynamics, suggested that our “life and mental processes have been conditioned almost exclusively by first order negative feedback loops” [5].  By contrast second order feedback takes us by surprise and we tend not to respond to it effectively. This is so true for church growth and decline – but that is the next blog!

Posted by Church Growth Modelling at 22:06